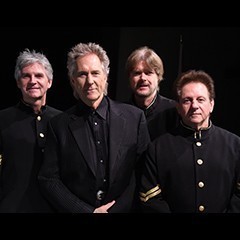 GARY PUCKETT and the UNION GAP was one of the most successful musical groups of the sixties. Gary's unmistakable signature voice garnered six consecutive gold records and top ten Billboard hits with the following titles: "YOUNG GIRL" • "WOMAN WOMAN" • "LADY WILLPOWER" • "OVER YOU" • "THIS GIRL IS A WOMAN NOW" "KEEP THE CUSTOMER SATISFIED" • "DON'T GIVE IN TO HIM" • "HOME"

GARY PUCKETT has performed on more than thirty network television shows and prime time specials during his career, even adding a command performance for the President and Prince Charles at the White House. The Union Gap disbanded in the seventies. In 1974, "Young Girl" was reissued in England where it received a silver record award for attaining a top-five position on the pop charts, several years after its initial release.

Gary continues to tour nationally & internationally, has a new album out now, "GARY PUCKETT - LIVE", and has recently released his first-ever Christmas CD, entitled "At Christmas".

Gary currently resides in Clearwater, FL with his wife and family.