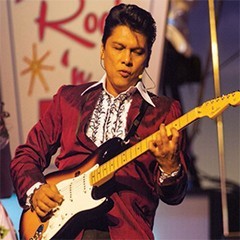 Sting Ray Anthony with his unparalleled Tribute to the Rock n Rollers of the 50's & 60's creates a high energy show taking the music to another level.

Having worked alongside Bobby Vee, Fabian, Danny & The Juniors, Chubby Checker and many other Original artist of the 50's & 60's Sting Ray has delighted audiences up on their feet dancing and singing to the greatest Oldies ever written as he rocks the house wherever he performs whether it be in Branson Missouri at Dick Clarks American Bandstand Theater or Legends In Concert in Las Vegas, 50s at the Hop, Rock and Roll Heaven, Legends of Rock and Roll, “The Winter Dance Party". He has worked and toured throughout North America and Canada playing to rave reviews and standing ovations.

Most recently Sting Ray's Jukebox Rock has taken Texas by storm playing to sellout crowds wherever he goes!