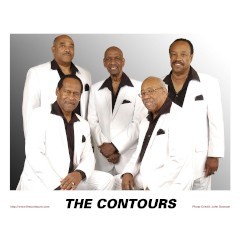 In 1958, a group of four extremely talented young singers - Joe Billingslea, Billy Hoggs, Billy Gordon and Leroy Fair created a singing group known as the Blenders. A short time later Hubert Johnson joined the group. After paying their “dues” for two years, singing for mostly local audiences, the group decided to take a shot at a recording career with Berry Gordy, Jr. at Motown Records. On the way to the studio, the group’s founder, Joe Billingslea suggested changing the name of the group to THE CONTOURS, so on that famous walk to Motown Records®, they became THE CONTOURS! It took a phone call to Berry from rock and roll legend Jackie Wilson (cousin of Hubert Johnson) and a second audition before THE CONTOURS became the third male group signed to Motown. After inking a seven-year deal, they released two records, “Whole Lotta Woman” b/w “Come On And Be Mine”, and “The Stretch” b/w “Funny,” both of which failed to chart. However, for THE CONTOURS, the third time would become the charm!

In 1962, Gordy created a new label for Motown Records called the Gordy label and signed THE CONTOURS as its first group. In the summer of 1962, Berry Gordy Jr. penned “Do You Love Me.” He added Huey Davis (sometimes called the sixth Contour) at guitar. The result was the group’s (and label’s) first hit. Within two weeks of its release, the song roared to #2 on the Billboard Hot 100, taking the #1 spot on the R&B charts and #3 on the pop charts. It became the group’s first gold record and remained on the charts for five months. The song was the Gordy label’s first million-seller, and it still holds the record as Motown’s fastest-rising hit of all time.

This series of smash hits landed THE CONTOURS as fixtures on the popular “Motortown Revue,” which toured the United States every year. Like the acts of the day, THE CONTOURS had a great choreography to go along with their great singing. However, their dancing style was over the top and it even included synchronized splits, flips and an occasional summersault. The result was a highly energized performance that thrilled audiences wherever they went.

Although Motown Records packed their bags and moved to Los Angeles in the early seventies, THE CONTOURS remained a Detroit- based group. Between then and 1987 the group’s popularity steadily increased throughout the US and Canada.

In 1987, “Do You Love Me” was included in the movie, “Dirty Dancing”, starring Patrick Swayze and Jennifer Grey. This revived the song’s popularity and it returned to the pop charts in July 1988 for eight weeks, peaking at #11. As certified by the Recording Industry Association of America, “More Dirty Dancing (1987 Film Additional Soundtrack)” (which included “Do You Love Me”) went quadruple-platinum.

The movie soundtrack spawned a ten-month “Dirty Dancing Concert Tour”, which featured THE CONTOURS and other artists including Bill Medley, Eric Carmen, Ronnie Spector, Merry Clayton and a set of dancers from the movie. The troupe entertained over two million fans in North America, Europe and Australia. The “Dirty Dancing Tour” was Performance’s 1998 Variety Act of the Year. The tour also give birth to a live CD release. THE CONTOURS contributed “Get Ready”, “Higher and Higher”, “Cry to Me” and “Do You Love Me” to the 1989 release “Dirty Dancing Live In Concert”. In September 1998, THE CONTOURS released a CD, “Great Dirty Dancing Hits”, sprinkled with several of their hits as well as hits of other artists.

In 1989, THE CONTOURS were inducted into Royal Oak’s Metropolitan Musicafe Rock ‘n’ Roll Walk of Fame In 2000, they received the Smokey Robinson Heroes And Legends Award. In 2010, they were inducted into the Doo-Wopp Hall Of Fame Of America®. In 2015, they were inducted into the Rhythm & Blues Hall of Fame. In addition, they have been nominated for The Rock and Roll Hall of Fame. In 2016, they continue to perform in the US and abroad, bringing their energetic, versatile and entertaining show to hundreds of thousands of fans every year throughout the world.

In recent years the group has been featured in PBS specials. "Doo Wop Gold," a video from some of these specials has been available for years and the DVD for their latest PBS performance, "Motown: The Early Years," was released in 2007. Watch for "Motown: The Early Years" on your local PBS station. In 2016, “Do You Love Me” is featured in a Pepsi® commercial which first aired during Super Bowl 50. In this, the 61st year since they first signed with Motown records, the group is as popular as ever. They play a number of dates each year including such high-profile events as Major League Baseball’s All-Star Game Gala and the NFL’s Tailgate prior to Super Bowl XV. The show is as high energy as ever, though the flips and splits of yesteryear have been replaced by a brilliant choreography more suited to gentlemen in their second half-century of life!