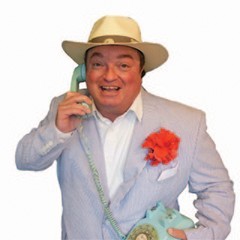 Tim, the son of Lon and Betty Jo, was born in 1962 in West Liberty, Kentucky. Tim’s career as a Blues Brother started in 1983 with lip sync shows such as “Puttin’ on the Hits”. Tim then assembled a band and began performing and singing live for audiences in the Ohio area and toured throughout the Midwest in a Blues Brothers show band called Jake and Elwood’s Blues Revue.

Tim has performed on cruise ships sailing to Mexico, Jamaica, the Bahamas, Grand Cayman and throughout the Caribbean plus a tour of Canada. Europe was one of his most favorite experiences performing in exotic places such as Paris, Berlin, Vienna, Brussels, Amsterdam, Barcelona, Lisbon, Morocco and also Saint Moritz, Switzerland. Tim has performed as a Blues Brother now for 23 years and still loves it with all his heart. He is often asked after a performance where he gets the energy to perform his stunts. He replies, “I get it from the audience.”