The Scoop Talks To The Bronx Wanderers 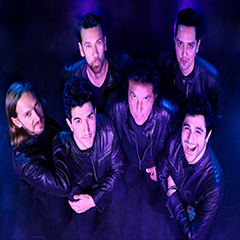 “I never thought it would work,” says Vinny Adinolfi of the Bronx Wanderers. But it did! Here’s the inspiring tale of how a kid from the streets of the Bronx made it big on the Strip in Las Vegas.

Many successful individuals tell of a journey to the top that began when they were a baby. For Vinny Adinolfi it really did happen that way.

“I was born in the same neighborhood as Dion,” Vinny recalls. “His mother and my grandmother were distant cousins, and my mom’s first cousin was very friendly with Susan (Buttefield) who wound up marrying Dion, and they used to hang out together. So Dion would always come over to our house, and when I was really little, he signed my baby book.”

Vinny made his first on-stage appearance around age seven at a Soupy Sales concert in New York City, where the slapstick comic had a Top 10 local radio hit with a novelty dance tune called “The Mouse.” “My dad put me in this big red polka dot bowtie like Soupy used to wear. Soupy pulled me up on stage, and I wound up doing The Mouse with him. And I loved it! I said, ‘This is where I want to be.’ And it’s been a lifelong struggle of how do I make that happen.”

“Then when I was about sixteen-and-a-half going on seventeen, I got in touch with Dion, and I said, ‘I would love a job in the record business. Is there any way you can help me get one?’”

At that time Dion was working with Terry Cashman and Tommy West, who had started out as recording artists, then graduated to producing. They struck gold — literally — with Jim Croce and went on to found Lifesong Records.

Vinny picks up the story: “The deal was to go see these guys. So I walked in and I said, ‘I want a job.’ And they laughed at me.”

“So I said, ‘No. Dion sent me! I want a job.’ The guy that interviewed me gets Dion on the phone, and he goes, ‘There’s a kid sitting here saying he knows you and he’s looking for a job.’ And Dion says, ‘I do. Give him a job.’”

“Just to test me they gave me one hour of work from 11 o’clock to 12 o’clock. It took me an hour-and-a-half each way to commute, but they wanted to see how bad I wanted the job. So, in that one hour I would work really hard, and after about four months they turned me into what was called the tape copyist.”

“Each week sheets called Song Plugger would say which singer was looking for what type of songs. There was a professional A&R guy on staff, and he would give me titles of stuff that we had in the tape catalog, picking songs for the artists. And I’m like, ‘I can do this, too!’”

“So I start picking songs for artists to do, and a lot of the people like the songs that I’m picking. So Cashman and West called me in and said, ‘We want to groom you as a record producer.’”

Since Lifesong Records was distributed by powerhouse major Columbia, Vinny was also at the offices of Columbia Record Productions every day. “All of a sudden,” he says, “I’m doing production work. I take the master tape, make sure it gets to the pressing plant, make sure the test pressing comes back and gets approved, make it into a record, and get it to the distributor. I’m working on Billy Joel albums, Neil Diamond albums, Bruce Springsteen albums, Michael Jackson albums, and I’m having a blast. I’m like a kid in a candy store.”

Vinny was also recording demos of songs in the company’s publishing catalog, and was “begging them, ‘Put me out. I want to be a star!’ And they said, ‘Stop. That’s stupid. You’re home at five o’clock at night. You’re with the family. You’re not on the road. You don’t want to do that.’ And they never would consider me as an artist.”

So Vinny pursued his dream on weekends. “I was in bands, primarily as the lead singer. I did weddings, bar mitzvahs, and every high school and college from Connecticut down to Philadelphia.”

Meanwhile, at his Lifesong/Columbia day job, Vinny continued to work on big-time projects involving top artists. After Sony bought out Columbia in 1988, “we did all we could do to survive.” Despite their best efforts, Lifesong closed shop in 2000 and Vinny’s job vanished. “Now what?” he wondered. “I’m not 21 years old anymore. We’ve got two kids, a house, and bills!”

Between his family and Lifesong responsibilities, Vinny had stopped performing in 1993. After a five-year hiatus, his cousin — who was an executive in Las Vegas — gave him a suite at the Monte Carlo Hotel for his 40th birthday. She also pushed him to get back in the singing game.  “She got the entertainment director to give me a week in July of 1999, and [it was] like a drug. I started playing again whenever I could.”

Then Vinny’s music career took an unexpected turn. One night his wife brought their youngest son Nick to a band rehearsal for an off-Broadway play that Vinny was in. As Vinny tells it, “Nick says, ‘Dad, I want to play a song with the band on drums.’ He’s 11. I said, ‘What, are you kidding me? You don’t know this music. It’s never going to happen.’”

Remarkably, “two days later the regular drummer gets a kidney stone attack and we need a drummer within an hour.  So I said, ‘I know this is the most off the wall suggestion in the world, but…let’s bring Nick in.’ The place goes crazy and Nick winds up doing dates with us.”

When Nick’s older brother Vinny (“Vin A.”) saw the money Nick is making each night, he wanted in on the action, and joined the band on guitar. Vinny (senior) struck out with his two sons and some “older” guys, playing the regional oldies circuit.

But his old neighborhood buddy (actor/screenwriter/producer), Chazz Palminteri, envisioned a bigger future for Vinny and urged him to create a retrospective of his career with his kids. At first Vinny was skeptical, yet eventually — with ongoing prods from Chazz — came around.

“I look in the mirror: I’m not 20 anymore. And it hits me. I’ll do a total reverse psychology thing. I’m going to have a band made up of 16 and 19-year olds…the only old guy in the band is me…and we’re going to take you back to your high school dance.”

They crisscross the country, working hard and losing sleep (and money), doing 225 dates a year, and leaving audiences awestruck wherever they play. In 2016 — 12 years into Vinny’s grand plan — they land a full-time residency with Caesar's Entertainment.

“We’re ranked #10 out of 180 shows in Vegas,” says Vinny, “and I pinch myself every day, because I never thought this would work. It’s like a Field of Dreams where people keep coming back, because they’re reliving their childhood through hearing this music done exactly the way it was back then.”

“I’m very honored to be on the Malt Shop Memories Cruise. We came from nothing [and] the success we’re having boggles my mind. I’m so thankful. We’re living the American Dream.”