Mary Wilson of The Supremes 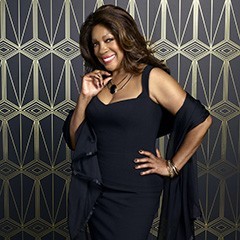 As an original/founding member of The Supremes, Mary achieved an unprecedented 12 #1 hits with 5 of them being consecutive from 1964-1965. Those songs are “Where Did Our Love Go”, “Baby Love”, “Come See About Me”, “Stop! In the Name of Love” and “Back in My Arms Again” according to Billboard Magazine. In 2018 Billboard celebrated their 60th anniversary with a list of “The Hot 100’s Top Artists of All Time”, where The Supremes ranked at #16 and still remain the #1 female recording group of all time.

With the same passion as she did singing with the original Supremes as well as with her solo career, the world renowned performer is an advocate for social and economic challenges in the United States and abroad. Ms. Wilson uses her fame and flair to promote a diversity of humanitarian efforts including ending hunger, raising HIV/AIDS awareness and encouraging world peace.

This Fall will mark an exciting time for Mary. On top of releasing her new book, she will be stretching her dancing muscles as she joins the cast of the 28th season of ABC’s “Dancing with the Stars”. The new season will premiere September 16, 2019.

With no sign of slowing down Ms. Wilson is getting ready to publish her fourth book “Supreme Glamour” on September 17, 2019. This highly anticipated coffee-table book will showcase the gowns The Supremes were known for over the decades and delve into more history of the most successful female recording group of all time. Supreme Glamour is now available for pre-order wherever books are sold.

2019 Mary was honored at the Paley Center for Media in Beverly Hills celebrating her work in music and her influence on young African-Americans and entertainment. Her conversation with Janice Littlejohn left the audience laughing with her unmatched humor and standing with applause displaying her graceful composure throughout the night. Showing the same love she has shown to all her fans, Mary during the reception, gladly met and personally thanked every attendee that night for their support throughout her career. In 2021 she will also be celebrating the 60th anniversary of The Supremes.

2018 marked an important step forward for Mary’s fight to have the Music Modernization Act (MMA) pass. Her vision came to fruition when the United States legislation signed the act into law on October 11, 2018. The act aims to modernize copyright-related issues for new music and audio recordings due to new forms of technology like digital streaming which did not protect music recorded before February 15, 1972. Her advocacy for this act lies with herself and other legacy artists gaining fair compensation when their songs are played on digital radio stations.

2015 was an exciting time for Mary, as her song “Time to Move On” climbed to #23 on the billboard dance charts, which marks her first time on the charts with a solo recording, since The Supremes.

2014 marked the 50th anniversary of the release of The Supremes’ first number-one hit single, “Where Did Our Love Go,” the first of five such consecutive hit singles. “Where Did Our Love Go” was released June 17th, 1964, and hit number one a couple of months later in August. The Supremes – like the Beatles, who recently celebrated their 50th anniversary – changed the face of pop music and became trendsetters who broke down social, racial, and gender barriers, which all started with the wild success of their first number one song.