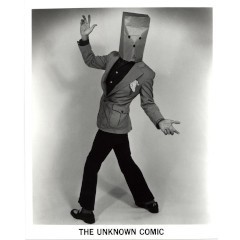 Murray Langston, aka The Unknown Comic is a Bags to Riches story of a young boy who left the comfort of the freezing weather in Canada and headed to California to get into Show Business, heavily influenced by watching all the early films of Jerry Lewis. In his early twenties, after having worked various jobs waiting for his break, he finally landed an appearance on the hugely successful Rowan and Martin’s LAUGH-IN TV show, as beautiful Burbanks greatest impressionist, with his impersonations of a Fork and a Tube of Toothpaste.

It didn’t make him a lot of money or a household word, but a few years later, Murray became a regular performer on The Sonny & Cher Show, which lasted 4 ½ years and led to other comedy acting jobs on several other hit TV shows of that era, such as The Bobby Vinton Show, The Wolfman Jack Show, The Lola Falana Show, and The Hudson Brothers Kid Show.

On a break from those shows, Murray decided to take some of this earnings and invested in a nightclub/restaurant which he called “Show-Biz”, where many aspiring performers began their careers. Among them, Michael Keaton, David Letterman, Gallagher, and Debra Winger, who worked for him as a waitress.

Unfortunately, after two years, Murray lost all of his investment and was out of a job. Out of money and wondering where to turn to next, he heard of a show called the “Gong Show”, which if you were in the Union, paid scale to union members and since Murray was a union member, but not wanting anyone to know he was suddenly desperate, Murray came up with the idea of putting a bag over his head, telling a couple of corny jokes, and calling himself “The Unknown Comic”. He only meant to do one show, but the audience, and the host Chuck Barris, thought he was so funny that he was asked to repeat his performance, appearing on over 150 episodes. This led to appearances on every talk show from that era, from Merv Griffin to Mike Douglas, Dinah Shore, and the Johnny Carson show. Within a year, Murray created a comedy act and was suddenly appearing in Las Vegas at the Sahara Hotel, and subsequently ended up appearing at just about every Hotel on the Strip.

Murray became the first comedian in Las Vegas to hire two other comics to open for him, appearing with his all-comedy show, first at the Landmark, then the Hacienda and the Dunes, long before other comedy clubs showcased comedians on the strip.

Murray decided to then move into another direction and wrote and produced his own movie about the homeless, called “Up Your Alley”. This was followed by another film which he directed, called “Wishful Thinking” and he later also directed a play, called “Run For Your Wife”.

During his career, Murray has appeared on over 800 television shows, close to 20 movies, and in clubs all over the country. Murray retired several years ago to raise his two daughters, and only rarely leaves the happy, comfortable life he loves to make live appearances. So, if you get a chance to see The Unknown Comic live again, remember, it’s an event you shouldn’t miss, because you may never get another chance again.