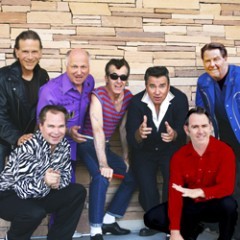 SHA NA NA brings their rock & roll celebration to town in a dynamic, crowd pleasing show that includes highlights of their over five decade journey from WOODSTOCK, the movie GREASE, THE SHA NA NA TV SHOW and their worldwide concert touring. In an interactive show where the audience sings and dances along…a good time is had by all ages. Hey all you greasers, teen angels and party dolls: twist, stroll and hand jive to the classics as performed by the crowned princes of doo-wop and rock & roll, Sha Na Na.

Sha Na Na bio…
Sha Na Na may not have invented rock nostalgia, but the group has successfully – very successfully – celebrated the music and the memories for the past four decades… in concert, in the movies and on TV, and on record.
Sha Na Na’s story is an all-encompassing one: they were in the original Woodstock Festival lineup, starred in “Grease”, hosted the “Sha Na Na” TV series for four years, and still play more than 25 concerts a year, from state fairs, performing art centers, casino showrooms to mega corporate functions worldwide.
And through it all – flower power, hard rock, metal music, disco, hip hop, rap and more – Sha Na Na remains true to the original concept: rock & roll is here to stay!
The Sha Na Na story begins oddly for a group that, in appearance, runs the gamut from greaser to gold lame. Attired in a turtleneck and blue blazers, the nucleus of Sha Na Na were undergraduate members of The Kingsmen, a glee club ensemble at New York’s Columbia University that used to perform a cappella versions of 50s rock songs as part of the performances.
These proved very popular and eventually rock & roll took over, instruments were added and Sha Na Na – the name comes from the 50s Silhouettes’ hit, “Get A Job” – was born.

Heard of Woodstock?...
If the original 1969 Woodstock Festival was a defining moment in rock history, it was also a defining moment in the history of Sha Na Na. The group’s appearance – only the eighth in Sha Na Na’s career, followed by the Woodstock album and movie, cemented their reputation and style. “We went on second to last, at sunrise on the final day, but, importantly, just before Jimi Hendrix,” recalls co-founder, drummer Jocko Marcellino. “We did 40 minutes and were paid $700…and the check bounced!”
Sha Na Na was the only group at Woodstock without a record deal. Immediately afterwards, they had one and today the group has released eighteen albums in total, with worldwide sales of more than 20 million.

TV was another important step for the group…
The group taped 97 episodes of the Sha Na Na music variety shows from 1977 to 1981 that were seen – and still can be – in worldwide syndication. The shows, which featured Sha Na Na’s music, plus the group in comedy skits with special guests, further established the group’s credentials as a part of   the landscape of rock & roll America.

GREASE is still the word for Sha Na Na…
“Grease: The Movie” became another significant building block in the Sha Na Na story. The group appeared in the 1979 musical, as Johnny Casino and the Gamblers, and contributed to the music score with six Sha Na Na versions of rock classics and one original song, “Sandy,” co-written by Screamin’ Scott Simon for John Travolta to sing. (Between takes, Travolta also sang a little doo-wop with the group.)
The accompanying “Grease” soundtrack album was a major hit, Grammy-nominated and certified eight times platinum.
Recalls Marcellino: “Whole new generations get swept up in the nostalgia craze, effectively becoming our potential audience.”
For example, Sha Na Na played the immense Los Angeles County Fair in front of a special audience – 20,000 girl scouts! “They were too young to have seen our TV show, but they had seen ‘Grease’ on video. They knew the words to every song from the movie.”
Sha Na Na recently rocked The Hollywood Bowl at this year's Grease Sing –A-Long presented by The Los Angeles Philharmonic hosted by Didi “Frenchy” Conn with special guest drummer Dave Grohl of the Foo Fighters. A Hollywood Bowl tradition, the event celebrated the 35th Anniversary of the beloved Grease film, the highest grossing musical film of all time.

Live in concert….
Working for over four decades throughout the world Sha Na Na has performed worldwide: from Carnegie Hall to the Grand Ole Opry, in Asia and in Africa, London to Tokyo. They have had some interesting newcomers opening for their show, such as: Bruce Springsteen, Billy Joel, Billy Crystal, Steve Martin and Jay Leno!
Live performances remain at the heart of Sha Na Na. Whether it is those girl scouts or their baby boomer parents, the reaction to the group is the same – the discovery of a common joy in the music from a time when part of the world was “greased and ready to rock.”

Sha Na Na Rocks with Symphony Orchestras…
As well as stints with MARVIN HAMLISCH conducting THE SEATTLE SYMPHONY, THE PITTSBURGH SYMPHONY, and THE MILWAUKEE SYMPHONY, Sha Na Na has made multiple appearances with PETER NERO & PHILLY POPS, THE COLUMBUS, LOUISVILLE, and PHOENIX symphonies.
Sha Na Na also appeared on The PBS Special A CAPITOL FOURTH with the National Symphony and Choir at the Capital Fourth Celebration in Washington, D.C. The special brought the sights and sounds of the symphony performance to a nationwide audience.
The arrangements for up to a seventy- six-piece orchestra range from the staccato strings of “Rhythm of the Rain”, a lush rhythm and blues “wall of sound” for “Soul and Inspiration” and a swinging arrangement of “Rock & Roll is Here to Stay”.
Of course Sha Na Na invites the orchestras to lose their tuxedo jackets, open their collars and roll up their sleeves. That, that is, to get greased and ready to rock & roll.

Sha Na Na recordings…
Their latest release, "SHA NA NA GREASER HIGH SCHOOL HOP” features 25 signature songs perfect for an instant high school hop dance party. "The Bop," "The Twist," "The Stroll," "The Hand Jive," "The Monkey," "The Jerk," "The Cha Cha" and even "The Hokey Pokey" are amongst the great dances of the ‘50s and ‘60s celebrated by Sha Na Na in this collection. Also included are songs they sang in Grease ("Sandy", "Rock & Roll is Here to Stay"), The Sha Na Na TV Show ("Rock & Roll Hall of Fame," "You Can’t Sit Down") and at Woodstock ("At The Hop").
Also in the Sha Na Na catalogue: SHA NA NA 40TH ANNIVERSARY COLLECTOR’S EDITION, ROCK & ROLL DANCE PARTY, ROCKIN’ CHRISTMAS (with “Santa’s On A Diet”, “Blue Christmas” and “The Rockin’ Dreidel Song”) and Sha Na Na’s first completely original Rock & Roll and doo-wop c.d., ONE MORE SATURDAY NIGHT. Sha Na Na CDs are available at iTunes and Amazon.