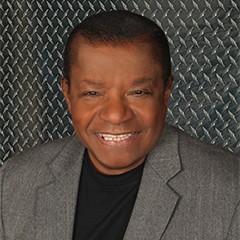 Singing in church at a very young age and joining his first doo-wop group in high school, Little Anthony has become a lifelong performer. Throughout his career, he has appeared and performed on groundbreaking television shows such as “Murray The K”, “American Bandstand”, and “Soul Train” and was inducted into the Rock and Roll Hall of Fame in 2009, alongside the rest of The Imperials. With hits like “Tears on My Pillow”, “I’m On The Outside (Looking In)”, “Goin’ Out Of My Head”, and “Hurt So Bad”.

But did you know Anthony is quite a storyteller too? And boy, he has so much to share about his remarkable life and career filled with crazy, funny, free-flowing stories. Now you get to hear from the man himself in this unique, intimate show that will give us a chance to hear him reminiscence about his career; weave all his hit songs among these stories behind the scenes; sharing his funny anecdotes and jokes to make for one unforgettable night!